Get ready for the new Pokemon TCG expansion series ‘Call of Legends’! 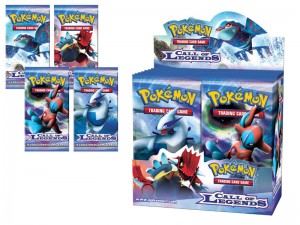 Powerful “Legendary Pokemon” are the focus of the next expansion for the popular trading card game. Pokemon Trading Card Game:  Call of Legends will include 106 cards, and is designed for beginner and intermediate Pokemon TCG players.  The expansion is scheduled to release on February 9, 2011.

Eleven Legendary Pokemon are featured, and can be found in both regular and “shiny” versions.  This is the first expansion to include all eleven of these powerful monsters. The Legendary Pokemon include:  Raikou, Entei, Suicune, Lugia, Ho-Oh, Kyogre, Groudon, Rayquaza, Deoxys, Dialga, and Palkia.

Special “Lost Zone” effects are also a feature of the expansion, creating new opportunities for players to expand their gameplay options.

Click here to check out the boosters, theme decks and blister packs we will have available for Pokemon TCG: Call of Legends!