Backed by a strong nationwide TV campaign, Flick-To-Stick Bungees™ is a new competitive collectible game based on brightly colored characters formed at the core of the Earth, after an asteroid strike millions of years ago. They have evolved with distinctive features, including an inner magnetism that allows them to stick to metal surfaces.

The new Bungees collectible toy line features the first series of 48 collectible figures. Players aim and flick their Bungees at metal scoring targets to compete, collect and win. Flick to stick, stick to score! Gameplay is enhanced with the Bungees Battleground, playing cards and scoring disks. 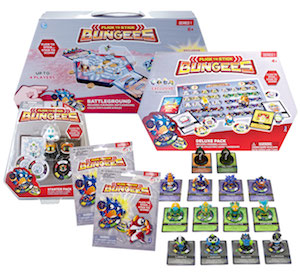 “Flick-To-Stick Bungees is much more than a collectible,” says Kris Thompson, National Sales Director at Banter Toys, “It moves kids away from the digital platform to something that still provides entertainment that is action filled and draws kids together in friendly competitive play.”

“The ‘magnetic power’ of the Bungees figures adds a new layer of interaction for the young collector and it is important for players to engage in this as it is really the core essence of the Bungees brand. This is demonstrated in the TV commercial that will air from mid-October up until Chris™ as on both subscription and free-to-air programs nationwide.”

“We are very excited to bring the already successful Bungees in the US to households across Australia and look forward to providing Australian children a new form of dynamic collectible.”

“Bungees have been sticking with kids because of their collectability, chase factor and ultimately the exciting game play,” said Laura Zebersky, EVP of Global Sales & Licensing, Jazwares, LLC. “They’re easy to use and each Bungee brings to life its very own story. Based on the early success in the US and retailers increasing demand for product, we have increased production to try and keep up with holiday demand.”

Flick-To-Stick Bungees™ will be available at Toys R Us, Big W, newsagents, Toyworld, selected Coles Supermarkets and all good toy retailers in Australia starting in mid-October 2014.